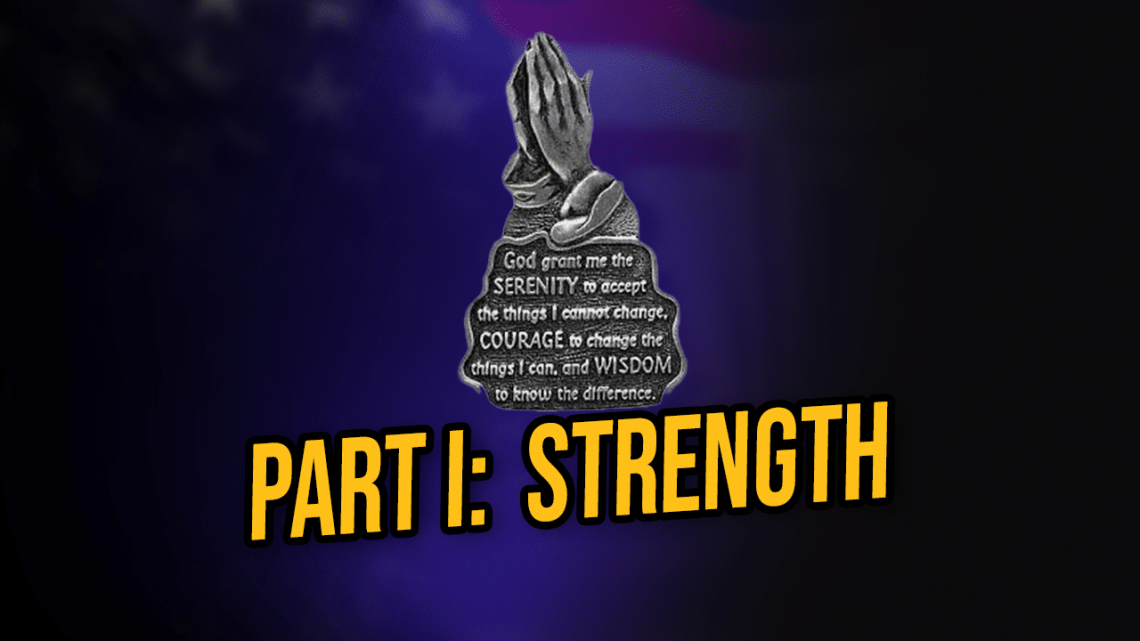 The next few posts will be based on the saying:

“Grant me the strength to accept that which I cannot change.

Grant me the courage to change that which I can

Grant me the wisdom to know the difference”

All three represent challenges in their own right.

documentation exists, every officer seems to independently decide what the rules are. For example, for the first couple of weeks, I brought my own cereal into the chow hall with me. I carried it with me openly. Then, one day, an officer stopped me and told me bringing food into the chow hall violated the “rules.” As I started to explain, he interrupted me, got right into my face and told me, threateningly, to turn around and take the cereal back to my room. “Yes, sir,” I responded.

In another instance, my friend, who sufferers from a severe abdominal condition and receives a special diet, always gets extra food to take with him with the permission of the dietician and doctor who treat him. Randomly, one day, an officer refused to allow him to keep the food, despite the food being labeled properly. No explanation sufficed and the officer proceeded to THROW THE FOOD IN THE GARBAGE! He had a peanut butter and jelly sandwich. My head still can’t fathom how a human being could throw a sick man’s food into the garbage.

As a final example, I wore a pair of sneakers to breakfast, which I had been doing on a regular basis. One day, an officer asked to see my “soft shoe pass” (yes, it’s a thing!). I had mine. I had removed the bottom half of the paper because it was completely blank. All the information resided on the part I carried. I explained that I had another full page copy in my room and could retrieve it. The officer put his face inches from mine and said, “You’ll go back to your room and change into your work boots!” “Yes, sir. . .”

All of these examples illustrate the unpredictable randomness that we, as inmates, fear on a moment to moment basis. The randomness creates quite a maddening (both maddening – crazy and maddening – emotional) conundrum for every inmate. More impactful for the inmate, the officer, at any moment, for any reason, could write up the inmate, which entails real life consequences like loss of time off for good behavior, as well as other daily “privileges.” The situation represents the unchangeable and definitely requires strength of will and character to withstand.

A common source of strength resides in a belief in God. I have been fortunate to participate in a couple different Bible study groups, despite my lack of belief. To observe the strength emanating from a devotion to the belief that God “has their back” impacts my own abilities simply through awareness of their source of strength. Their inspiration, to some degree, inspires me. As I have stated in an earlier post, their pathways, although divergent, come together in a singular end – God provides the strength required to weather the storm of prison life.

To be fair, other sources of strength exist among other inmates. Some possess the innate ability to see the positive side of any situation or ignore their negative surroundings. I do not possess that quality. For me, I try to practice maintaining a positive attitude through my interactions with other inmates and through communication with friends and, especially, family. Through repeated exposure to frustration and continued attempts at “bouncing back”, my abilities improve. Unfortunately, some succumb to the pressure. I have often conversed with other inmates about the strength needed just to remain at baseline.

One may ask why I haven’t given myself over to the belief in God. I must truly feel it within myself. If I don’t, I would feel like a hypocrite. Until that time, if it should come, I’ll continue to muddle through it to the best of my ability and continue to observe others in hopes of discovering ways to cope. I will close by saying, despite my lack of belief, I am truly impressed by the strength that God provides to those who truly believe. Personally, I try to observe, learn and apply that knowledge to help myself and other inmates to mentally survive the challenges of prison.