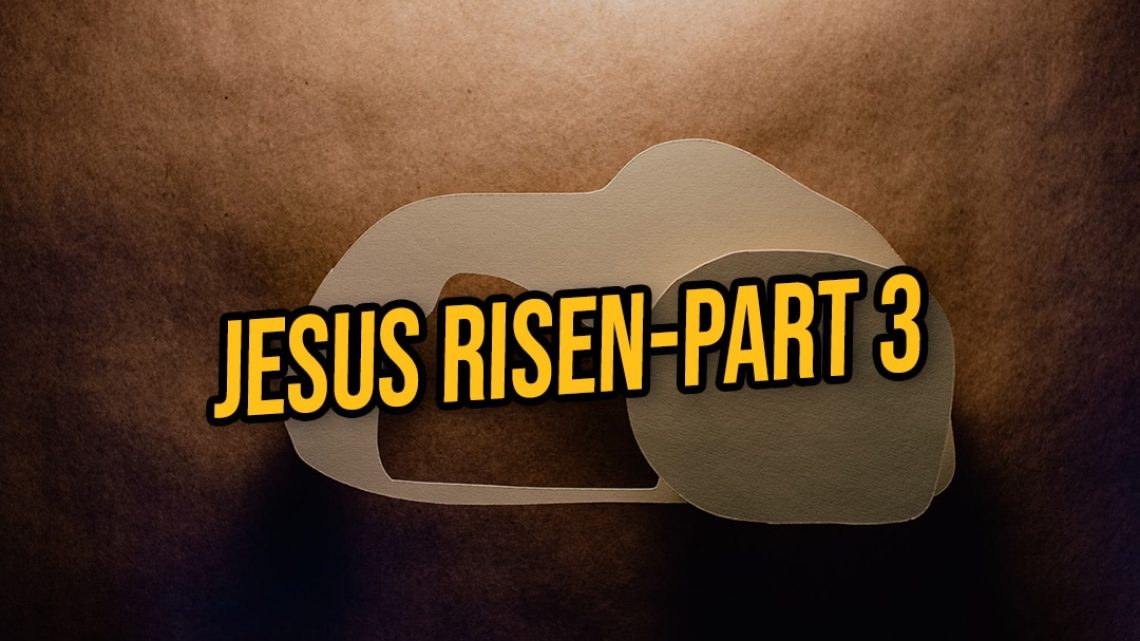 Below is part 3 of Did Yeshua (Jesus) Really Rise.  I will discuss 2 other explanations skeptics typically use and the concerns with those explanations.  Hopefully you enjoy.

D.  The Disciples Were Fooled By An Imposter

Some nonbelievers have argued that an imposter tricked the disciples and convinced them that Jesus was still alive; the disciples then unknowingly advanced the lie.

While this explanation accounts for the resurrection observations and transformed apostles, it requires an additional set of conspirators (other than the apostles who were later fooled) to accomplish the task of stealing the body.  As many detectives could attest, the less the victim understands about the specific topic and area in which he or she is being “conned” the more likely the conn artist will be successful.  Victims are often fooled and swindled out of their money because they have little or no expertise in the area in which the con artist is operating.  The con artist is able to use sophisticated language and make claims that are outside of the victim’s expertise.  The crook sounds legitimate because the victim basically does not know more about the subject than the person attempting the con.  However, when the targeted victim knows more about the subject than the person attempting the con, the odds are good that the con artist will fail at the attempt to fool the victim.  Therefore, the proposal that a sophisticated first-century con artist fooled the disciples seems unreasonable.

1.  The impersonator would have to be familiar enough with Jesus’ mannerisms and statements to convince the disciples.  The disciples knew the topic of the con artist better than anyone who might con them.

2.  Many of the disciples were skeptical and displayed none of the necessary aspects that would be required for the con artist to succeed.  Thomas, for example, was openly skeptical from the beginning.

3.  The con artist would need to possess miraculous powers; the disciples reported that the resurrected Jesus performed many miracles and “convincing proofs” (Acts 1:2-3)

4.  Who would seek to start a world religious movement if not one of the hopeful disciples?  This theory requires someone to be motivated to impersonate Jesus other than the disciples themselves.

5.  This explanation also fails to account for the empty tomb or missing body of Jesus.

E.  The Disciples Were Influenced By Limited Spiritual Sightings.

Some skeptics have offered the theory that one or two of the disciples had a vision of the risen Jesus and then convinced the others that these spiritual sightings were legitimate.  They argue that additional sightings simply came as a response to the intense influence of the visions.

This proposal may begin to explain the transformation of the apostles, but it fails to explain the theory of the empty tomb and offers an explanation of the resurrection observations that is inconsistent with the biblical record.  It is not unusual to have a persuasive witness influence the beliefs of other eyewitnesses, it is unreasonable this persuasive witness could influence everyone of the eye witnesses.  The more witnesses who are involved in a crime, the less likely that all of them will be influenced by any one eyewitness regardless of that witness’s  charisma or position within the group.

This proposal also suffers from the same liabilities of the earlier claim that the disciples imagined the resurrected Jesus.  Other concerns with this explanation are:

1.  This theory fails to account for the numerous, divergent, and separate group sightings of Jesus that are recorded in the Gospels.  It is not reasonable to believe that all these disciples could provide such specified detail if they were simply repeating something they didn’t see themselves.

2.  As many as 500 people were said to be available to testify to their observations of the risen Jesus (1 Cor 15:3-8).  Could all of these people have been influenced to imagine their own observations of Jesus?  It is not reasonable to believe that a persuader equally persuaded all these disciples even though they did not actually see anything that was recorded.

3.  This theory also fails to account for the empty tomb or the missing corpse.

Hopefully you enjoyed reading part 3 of this series.  Later on next week, I will conclude the series with 2 more explanations.