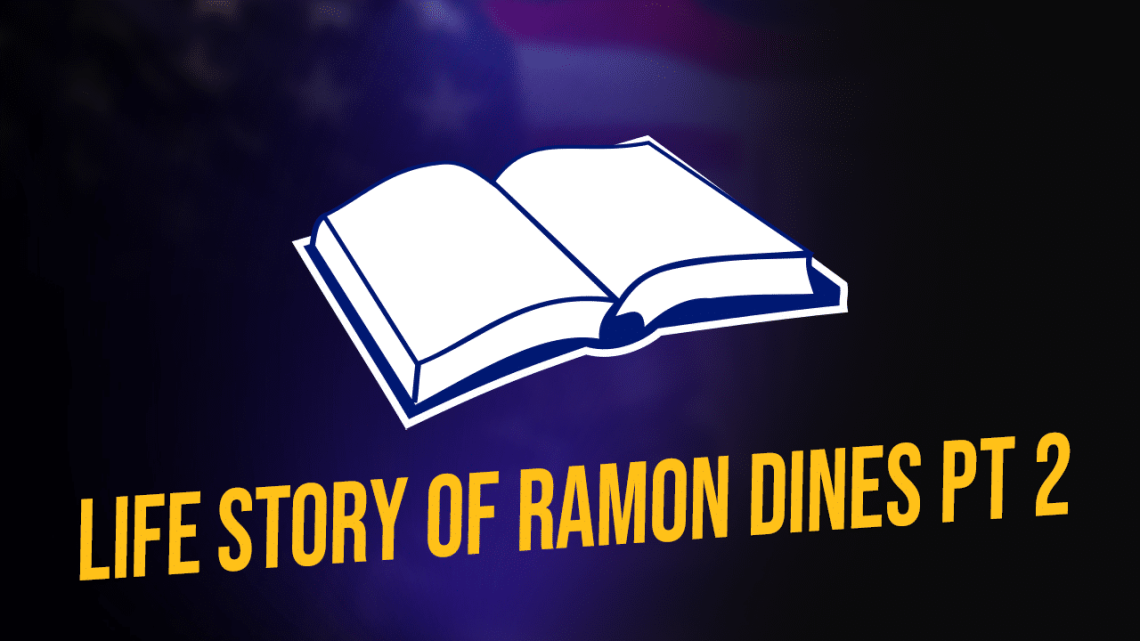 Below is the second of 3 parts of the amazing life story of Ramon Dines.  Ramon is a divorced father of a beautiful 21 year old daughter.  He is at the end of a 25 year sentence due to be released in December 2022.  During his long incarceration he has started a digital billboard business with his brother/best friend and publishes an on-line comic called “Spankie The Cat”.  It is available for free on www.webtoons.com.  He has just completed his first graphic novel called “Pets DC: Rise of the Pets”.  It is being published by ABO Comix due to be released in early 2022.  Pets DC is commentary on the prison system told through the lens of pets in a pet stop.  Ramon welcomes all mail.  Feel free to write to him at:

Thank you again for your great comments about part 1.  Without further of due please enjoy the 2nd part of Ramon’s story and feel free to send me your comments of this part if you like.

Canada was completely different than America, but still kind of the same.  Every college break, I came back to Washington DC.  I still had an apartment there, and I was paying my way through school printing and selling T-shirts.

By winter of 1995, I was looking to start my final year to get my bachelors of science degree in mechanical engineering with a focus on moving heavy objects.  It was December and I was on winter break in my apartment in DC.  It had been snowing all day and was due to snow all night and all the next day.  Then, the news reported that it was 80 degrees in Orlando, FL.  I immediately called my best friend and said, “I’m moving to Florida.”  I called the airline and booked a flight for that afternoon.  I packed up all my gear (it could all fit into 2 large bags) and by 6 PM I was in Orlando!!!  I caught a cab to the nearest apartment complex.  Special note: in DC I was paying $400 a month for a studio apartment with no amenities.  This place in Orlando had 2 swimming pools, tennis courts, fitness club and was gated!!!  A 2 bedroom 2 bath was $550 a month.  I paid for the year up front and moved in that day.  Florida has no real public transportation so I bought my first car.  I spent most of the year in Canada then my breaks in Orlando.  During summer break I did an internship at an animation company and I drew caricatures in the theme park.  I was still working with the publishing company and selling T-shirts.  Long story short, I was flush with cash and had nothing to spend it on.

By 1998, I had earned 2 masters degrees and went looking for work as an engineer.  I ran into 2 problems.  First, because I earned my degrees in Canada, not all of my credits transferred and in order to qualify for the practical engineering exam test I would be required to take even more classes.  I refused.  Second problem was the starting salaries at all the places I interviewed would be between $35k and $37k and require 50+ hours per week.  I was already earning $50k+ a year working 3 to 5 hours a week!!!  So no thanks.  Shortly after I met a guy who owned a printing company, but needed an artist.  We became fast friends and I ended up buying into his business.  Now he had been printing for over 20 years and taught me how to really print.  I thought I knew what I was doing.  I did not.  What he showed me would change how I would print for the rest of my life.  My income also increased exponentially!!! But he soon was going through a divorce and I was also busy chasing a woman who become my wife.  The business failed from neglect.  We went our separate ways and I soon found myself restless for something to do.  I had lots of money and lots of time, but no structure.  A friend then introduced me to sell at festivals, shows, fairs, and carnivals.  My income exploded.  I could work 1 or 2 shows a month and pull in the mid to high 5 figures.  I was on track to earn more than $500k working 1 to 2 weeks each month!  I didn’t know it at the time, but everyone thought I was a drug dealer.  The money I was making was coming in so fast and all in $5, $10, and $20’s mostly.  I wasn’t claiming it on my taxes so I couldn’t put it in a bank, so I bought 3 huge safes and stuffed them full of cash.

Anyone who knows Washington DC knows housing is expensive.  But I remembered my days of running away from home.  I was looking to move.  This was about 1998 and so I was apartment hunting, when I was walking past a house that was boarded up on Capitol Hill (an expensive neighborhood) and I thought to myself, “Why pay rent when there is a perfectly good house for free?”  I went down to HUD and typed in the house address.  What I found was a house no one had paid taxes on since the 80’s and the owner of record was listed as living in the Midwest.  So I knocked on all the neighbor’s doors and told them I was thinking about “buying” the house.  See I needed to know if any neighbors knew the owner.  They all said they would be glad if someone fixed it up.  That night I went to my favorite store (Home Depot) and bought new locks.  Then at around 3 AM I quietly climbed to the second floor and broke into the house.  Next, I changed the locks behind the boards.  I waited 2 weeks then I went back to the house around 7 PM and told my new neighbors I bought the place.  I had 2 of them help me pull down the boards.  I then used the keys I said I got at closing to open the front door.

My neighbors were great and it only took me a couple weeks to have the roof done and fix up one room and a bathroom to live in while I did the other renovations.  All told, it cost me about $20k and took 5-6 months, but I was living in a 2000 sqft 3 bedroom 3 bathroom home on Capitol Hill!!!  No one ever questioned it and my neighbors would be the first ones to tell you I owned it.  All I had to pay was my utilities.  Within 6 months, I had gained an apartment building (6 units) that same way and made the units very affordable at $800 per month (cash).  So on top of everything else I had an additional $4,800 a month.

By this point in my life it seemed that I could do anything.  I met a guy who was “gang affiliate, that meant nothing to me.  I had never met anyone that was in a gang.  I first made him temporary tags for his.  Then when I got tired of him coming back every 30 days so I made him “hard tags”.  He didn’t know this was possible, but once he did, his superiors wanted stuff as well.  First ID’s and greencards, then credit card cloning.  I didn’t need the money, it was the challenge.

Then “that day” happened.  It was about 2 AM (it was after 9 PM which makes me very evil).  My “friend” comes over to my house.  He did not know he was followed.  This was 2001, I am married with a 6 month old daughter.  Anyway, some other person sneaks into my house looking for my “friend”, but I catch them.  They say my “friend” owes them money.  I tell them to leave.  They say no, and threaten to shoot everyone in the house.  I take all threats seriously, I can only take you at your word.  If you say you are going to kill me, even in jest, I feel I must kill you before you kill me.  Long story short, I killed the guy before he could kill me.  Then my “friend” and I dumped the body.

A few months later my “friend” told on me and I was facing a sentence of 145 years minimum mostly because he lied and added extra stuff that I never even heard of.  So I plead guilty to second degree murder and was sentenced to 25 years in prison.  On 25 years, you have to serve 22 years.  I have served 21 years so far.

About 3 to 4 years into my sentence I decided I didn’t like the guy I was.  That guy’s best thinking got 25 years in prison.  I set out on a journey to become the man I would want my child to know.  The first thing I had to do was change my core beliefs; the subconscious beliefs that form the basis of my though process.  The unforeseen problem with this is if you reject all of your core beliefs you now believe in nothing.  I was at my deepest point of depression so I got in the shower and cut my left radial artery.